Campaigners call on government to #EndTheYoungParentPenalty 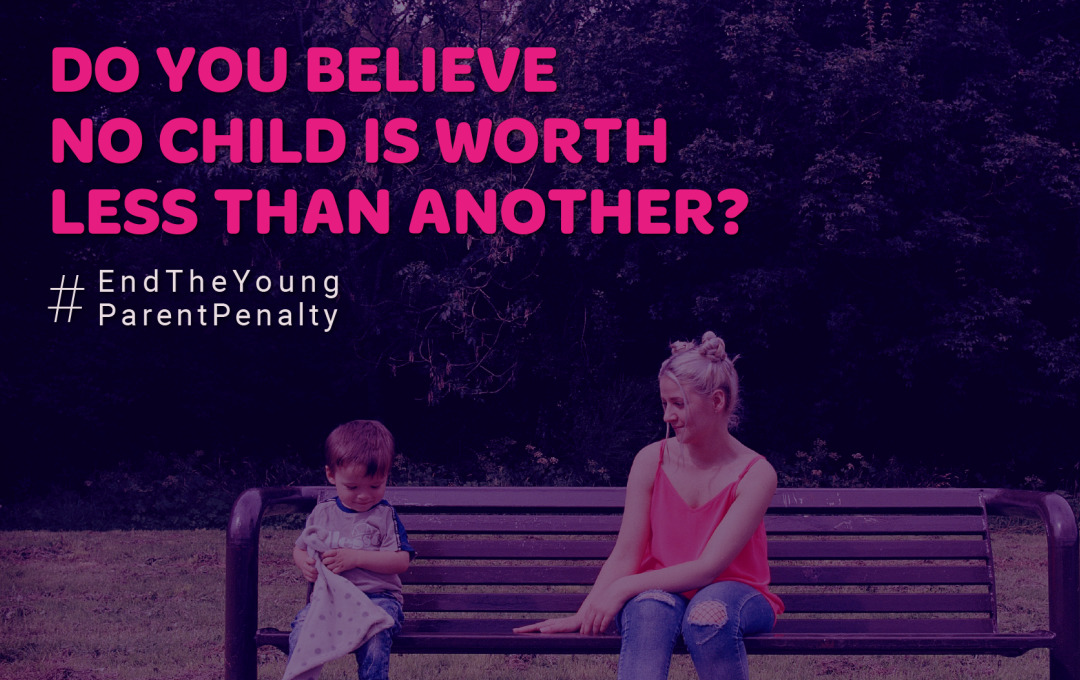 We recently joined with over 100 other charities to condemn age inequality in Universal Credit for families, which “woefully misunderstands” the actual reality of young parents’ lives.

Young parents and their children, particularly in single parent families, are being pushed into poverty because of age-based differences in Universal Credit provision. A report last month from Child Poverty Action Group estimated that single parents under 25 are £65 worse off per month than parents over 25, while parent couples are £100 worse off per month. One Parent Families Scotland say the impact of this policy change on young single parent families is “devastating”, throwing many families they work with “into crisis and needing to turn to foodbanks”.

A letter from the UK minister for welfare delivery Will Quince MP in response to the campaign said: “The Government considers that, where possible, it is in the best interests of children to be in working households. The lower rates for younger claimants who are under the age of 25 years reflects the fact that they are more likely to live in someone else's household and have lower earnings expectations.

“This is intended to maintain the incentive for younger people to find work which has been aided by the Department’s £2 billion Kickstart scheme – already creating thousands of high-quality jobs for young people. Universal Credit pays up to 85 per cent of childcare costs, compared to 70 per cent in legacy benefits and can be claimed up to a month before starting a job.”

However, campaigners have hit back at this reply, saying it fails to recognise the circumstances of young parents.

Chief Executive of One Parent Families Scotland, Satwat Rehman, said, “The UK Government’s response to the serious concerns of charities supporting women, children and families, and those trapped in poverty around the UK is simply not good enough.

“The government says under 25s are more likely to live in someone else’s household, but this woefully misunderstands the reality of young parents’ lives."

Around two thirds of under 25s claiming Housing Benefit themselves - and therefore living independently - are parents with young children. Most young parents do not live with their parents, and so the idea that there are lower costs for younger parents simply doesn’t reflect reality.

Louise Hunter, CEO of Who Cares? Scotland, says that the idea that young parents can live with their parents is also “wholly ignorant of the circumstances of many Care Experienced parents across the country.”

“In an unsteady time of rising poverty and difficult finances, many families find it difficult to maintain control in these difficult circumstances, especially those without the vital lifeline of support of stable family connections.”

UK statistics indicate that women with experience of the care system are three times as likely to have a child by the age of 18 as women without, and a recent independent review into the care system in Scotland found that tackling poverty was essential to “break the cycle” of intergenerational involvement in the care system.

The claim that the change is intended to incentivise young parents to get into work has also been criticised by campaigners and politicians, who have pointed out that 75% of children in poverty are already in working families.

For this and many other reasons, this policy change has come under heavy fire, with
Liberal Democrat work and pensions spokesperson Wendy Chamberlain MP saying the government’s justifications “are callous, and simply do not add up,” as well as pointing out in response to the government’s justification that younger people in work generally have lower incomes, “We don’t provide Universal Credit based on earning expectations. To do so would be absurd.”

“The reality is that [young parents] and their children have less funds overall to meet basic needs like putting food on the table because of their lower Universal Credit payments. Providing less support to young parents simply drives those families further into poverty.” - Wendy Chamberlain MP

Other parliamentarians have also called out the failure to understand the real lived experience of young parents and demanded change from the UK government, with Labour’s Pam Duncan-Glancy MSP stressing that “It is vital that single parents under the age of 25 get the support they need.”

“There cannot simply be an assumption from the UK Government that young parents will be able to turn to others for support. It should not be handing down this penalty to young parents.” - Pam Duncan-Glancy MSP

Young parents are one of the groups who are most at risk of poverty, and 39% of children living in poverty in Scotland are living in one parent families. These changes to the Universal Credit allowances are hitting young single parents particularly hard, and giving their children a huge disadvantage in life. If the UK Government took action to address this injustice, it could lift 10,000 children out of poverty for a cost of under £200m.

Read the letter calling on the government to #EndTheYoungParentPenalty here.