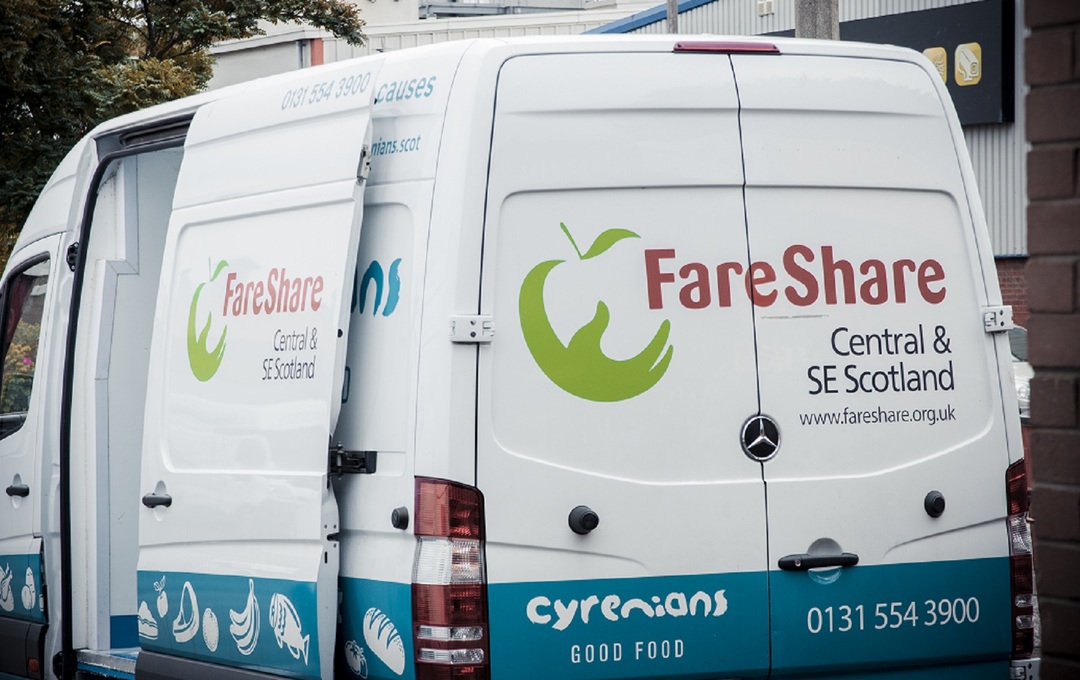 Despite the promised "return to normal," food insecurity in Scotland is far higher than it was before the pandemic hit, with Edinburgh charity Cyrenians saying that demand for food support is more than double what it was in 2019.

Cyrenians, an Edinburgh based charity that tackles the causes and consequences of homelessness, works with UK wide charity and food redistribution network FareShare to build community through food and tackling food poverty. Their depot in Leith redistributes good-to-eat surplus from the supply chain to charities and community groups across Central and South East Scotland.

The depot, and the wider FareShare network across the UK, take delivery of surplus good-to-eat food, which is unsold or unwanted by the food industry, sort it regionally, and distribute it through a network of charities and community groups. These organisations are then able to give nutritious, accessible food to vulnerable families and individuals, many of whom are struggling with unemployment, low income, debt, homelessness, family break up, dependency or other issues that can lead to homelessness.

With more than 2 million tonnes of edible food wasted on farms and in factories every year in the UK, the redistribution of food by Cyrenians’ FareShare is not only supporting those facing difficulties in life, but also the environment.

Cyrenians CEO, Ewan Aitken, said "It's utterly unconscionable that more than 2 million tonnes of food is being wasted in the UK while millions are going hungry and facing all the traumas, stresses and financial struggles that come with that. We've seen the need for our services explode since the start of the pandemic, and with the cost of living crisis, that's only getting worse."

According to recent figures, in 2021-22, the Cyrenians depot delivered over a thousand tonnes of food to charities and community groups across Central and South East Scotland, enough to make over 2.3 million meals.

Although this is less than was needed at the height of the pandemic, when Cyrenians delivered 1,800 tonnes, it is still a far cry from the 450 tonnes redistributed in 2018-19. Cyrenians say that this is a direct result of the ongoing cost of living crisis, and a continued lack of support for the most vulnerable in our society beyond the end of the pandemic.

The continuing impact the cost of living is having on families across the UK is highlighted by new figures published this week by FareShare, which says that the cost of living crisis is impacting 9 in every 10 organisation it works with, and that the 54,000 tonnes of food delivered by FareShare locations like the Cyrenians depot is only barely lower than the amounts needed while the pandemic was in full force.

Nearly 13.8 percent of households, including 2.6 million children, are currently struggling to get enough to eat across the UK, and Central and South East Scotland is no exception.

A survey of 1179 people conducted by Cyrenians in March found that more than one in five Scots have struggled to pay for their weekly food shop as the cost of living crisis deepens.

Cyrenians FareShare Depot Manager, Craig Buchan said, “These figures show the scale of just how many people have been struggling to get enough to eat, during the last year in Central and South East Scotland. Our staff and volunteers have been working flat out to support the hundreds of people and families who are going hungry. The cost of living crisis is having a very real impact on people’s lives and the demand for food is higher than ever.”

Aitken said, "I'm really proud that at Cyrenians we're able to be part of redressing that balance - our Depot team and the whole FareShare UK network are able to make a real difference by connecting people with the food they need. It's not just about addressing hunger in the moment - when people get the food they need, they're more able to deal with what life throws their way. These numbers show just how big of an impact people like our Depot team are having nationwide."

I see first hand how Scots are struggling