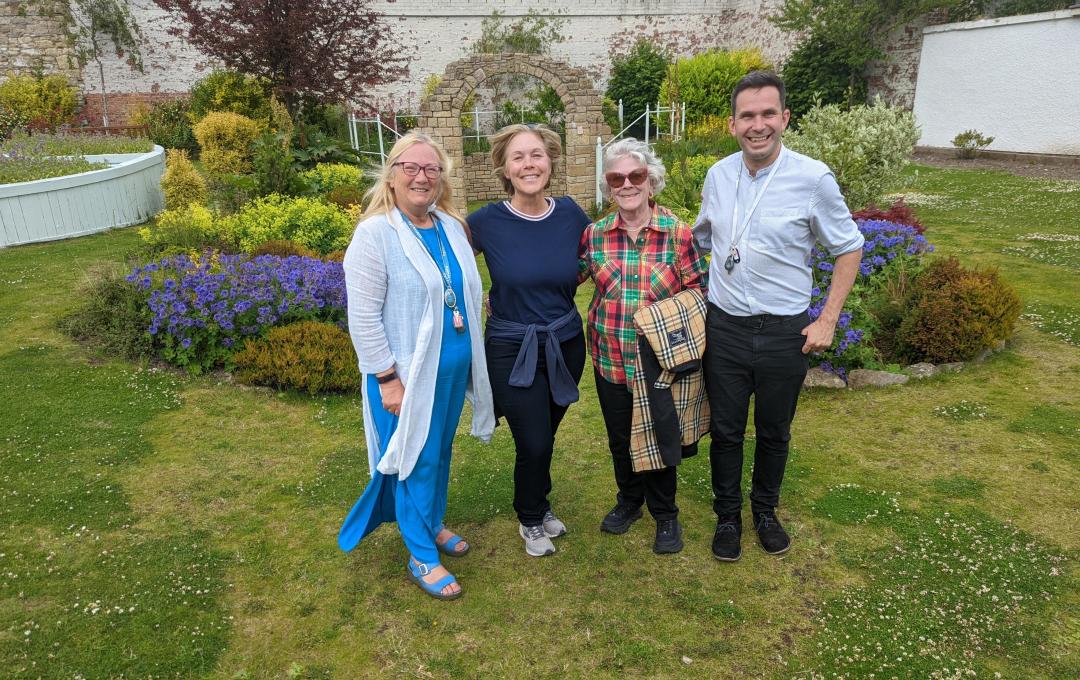 Our Falkirk services were featured in an article in the Daily Record on 29th June 2022, following a visit from the great-great granddaughter of Robert Dollar, a famous philanthropist who had gifted Dollar Park to the people of Falkirk more than century ago. Dollar Park is now home to the Walled Garden and Arnotdale House & Cafe, which support our work in tackling the causes and consequences of homelessness.

The following article was written by Kirsty Paterson.

The great-great grandaughter of Falkirk's most famous philanthropist was "visibly moved" when she saw the work being done in the park he gave the town more than a century ago.

Darayn Hickingbotham, great-great granddaughter of Captain Robert Dollar, paid a visit to the park that still bears her relative's name - and she was delighted to hear about the good work now taking place there. The small mansion house at the heart of the estate, Arnotdale, is now a cafe owned and run by the charity Cyrenians and Ms Hickingbotham heard more about their work on her whistle-stop tour.

On her visit last Thursday, accompanied by her mother, she also met representatives of the Friends of Dollar Park, who have helped to rejuvenate the park in recent years.

Jonathan Reid, general manager of Arnotdale, said: "She was visibly moved at times to see the work that's going on and the legacy that her ancestor left. "I think she was very touched by it all - she's said she wants to come back and do some gardening next year.

"She was talking about the homeless problems in San Francisco and so she was asking about the work we do and is really keen to get involved."

Cyrenians support homeless people, helping them build confidence and gain the skills they need to find employment and move to a more settled life. Ms Hickingbotham also saw how the park's walled garden - which lay neglected for many years - has been beautifully restored by the charity in partnership with Falkirk Council's Justice team.

And she heard some little known stories about her great-great grandfather from a former Provost of Falkirk, Pat Reid, who had researched the town's famous benefactor for the occasion. After enjoying lunch, most of the visit was taken up admiring the garden and grounds of Arnotdale and she was fascinated to see the floral clock being planted for the summer.

Jonathan said: "I think the civic pride and community spirit really got to her and because it's based around something her grandfather left for that very purpose, it really moved her. She saw the war memorial and then went into the walled garden where the community payback scheme is really working - giving people back a bit of pride.

"The whole thing just tied in so nicely with what the park was intended to be in its infancy."

Our cafe is open 7 days a week, 10am - 4pm with the Walled Garden and Park surrounding the establishment, allowing customers to enjoy a cake, coffee or a conversation in nature.

Cyrenians respond to recent figures on deaths from drug misuse.